The morning started off with a 3:45 AM wake-up call. Hubz filled up my Infinit/water bottles and made me some delicious scrambled eggs and toast while I got myself dressed and situated. I chatted it up with my fine housemates (all from the Mid-Maryland Triathlon Club, several of whom were eating pop tarts and chocolate milk for breakfast?!) while I ate and just tried to focus on finding my zen place. Before I knew it, it was 4:45 – time to pack up my special needs bags and head to transition!

Hubz drove me by run special needs but then we started to hit the closures so I walked from there. I stopped by bike special needs to drop my bag before heading to transition. First I stopped by my run bag to deposit my running shoes (which I stupidly forgot to put in for day-before drop off). I think I unpacked and re-packed my bike and run bags at least 5 times each because I was so worried I had forgotten something. Finally I was satisfied and headed over to the rack to prep the bike.

I strapped on my bento box loaded up with nutrition and attached all my water bottles appropriately. Then for the mildly annoying part: borrowing a bike pump. Normally this is no big deal transition before a race, but nerves must have been much higher because it took me a few tries to get someone who didn’t mind waiting for me to pump my tires up with their pump. I actually got to repay the good karma, though, as I borrowed a pump from a woman who needed some assistance hooking on to her (rented) Zipps, so we helped each other out. I sunscreened up and then forced sunscreen upon most everyone around me (yep I’m a true public servant).

Unlike my normal “ACK 5 MINUTES TIL TRANSITION CLOSES!” timing, I had plenty of time to get organized so I even stood in line for the port-a-potties before leaving transition. This turned out to be the right choice because once I got down to the Mirror Lake beach the lines there were totally bananas.  I probably left transition around 5:45 AM and walked the short way to the beach. I was still feeling totally zen so I just took a seat on the beach and observed the chaos for a while. I chatted with a woman who was there sherpa-ing for her husband, while re-braiding my Heidi french braids no less than 5 times – didn’t want the hair flying in my face!

I chatted with a few other folks while enjoying the somewhat chill pre-race music (Adele…really?!) With about 10 minutes left to go until line-up time, I noticed a woman from Team Z struggling to get into her wetsuit so I lent her a hand. I learned her name was Barbara and we chatted for a while. She had a clever little plan to carry a Gu in her wetsuit sleeve and eat it as she came out of the water and crossed the beach for her second loop…not something I felt was necessary but a neat idea nonetheless.

Before I knew it I heard the cannon alerting the start of the Pros (6:20 AM). And thus race day officially began! Soon thereafter it was time to line up. This year saw the debut of the Swim Start Initiative at Lake Placid. Rather than the traditional mass swim start, we self-seeded by projected swim time and entered the water in a continuous wave. Our individual time started when we crossed the timing mat on the beach, right before entering the water. It was difficult at first to find enough room in the corrals. I was estimating about 1 hour 30 minutes total time which was right about the cut off between two corrals. As I wandered my way into the crowd I passed an awesome set of spectators who were carrying a giant inflatable Alpaca!!! I happen to love these creatures – I often wear a silver alpaca charm as a pendant and I passed this awesome sculpture often on my training rides through Potomac: 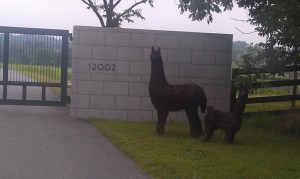 So of COURSE the inflatable alpaca got a hearty high five from me on my way into the swim corrals! That alpaca was destined to make several more appearance throughout the day…a true spectator all-star.

When the cannon went off for the first age groups entry (6:30 AM) I happened to line up with another couple of ladies who were aiming for the same start place so we chatted it up while slowly moving our way forward. One was another first timer and the other was doing her second full IM. It was really nice to just chat with folks as a way to relieve the pre-race jitters. Before we knew it we were up at the front and we were charging into the water!

I have to say that the new swim start was absolutely GLORIOUS for me. For the first time, I didn’t have to fight anyone to get horizontal and start swimming. Granted, the first 300-400 yards were still pretty congested, but since I was primarily swimming with others at my same pace, it honestly wasn’t stressful at all. At first, the crowd was too thick for me to get close enough to sight off Mirror Lake’s bright orange underwater cable, but because other folks were sighting off it, it was easy to stay right on course. Plus, the movement of everyone through the water made it like super-drafting conditions. I was moving quickly and smoothly without too much effort, and it felt awesome.

I realized after swimming for a bit that I had forgotten to start my Garmin – D’OH! Mega rookie move. So I hit the start and figured about 10 minutes delay for purpose of mental calculation. Shortly thereafter, it seemed like the crowd had thinned out a bit, so I started moving to the right…and pretty soon I could see the cable. Score! Not too much later I had to swing wide to avoid the crowd at the first and second buoy/turns, but once I hit the straightaway on the way back I found the cable again and it was smooth sailing. The first loop honestly flew by and I was constantly amazed at how much FUN I was having. Having fun swimming in open water – unheard of!

After the first loop we ran out of the water, crossed a timing mat on the beach, and then headed back in for round 2. I looked at the clock and did some complicated mental calculations to guesstimate my first loop time, even though I really didn’t know either A) what time I crossed in the water or B) how long I swam before starting my Garmin. Somehow I figured out that I was somewhere around 40-45 minutes…turns out I was right at 41:01 – not too shabby! At the start of the second loop I was able to get a spot right on the cable right away and held pretty close to it for the rest of the swim. Being able to sight off that thing was amazing and it clearly helped me swim much better on course than my normal wibbley wobbley (timey wimey) open water nonsense!

I started to get a bit bored with the swim towards the end of the second loop but was still having a great time. I started kicking a bit more to move some blood down into my legs, and before I knew it I was at the beach again. The second loop of the swim went by in 41:30 for a TOTAL SWIM TIME OF 1:22:31. Pretty dang close to even splits thankyouverymuch! 🙂 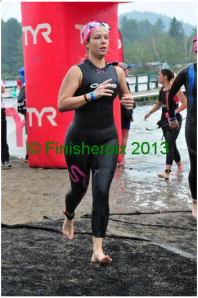 Feeling great, I booked it up the beach to the wetsuit strippers. Once I was stripped, I started the (long – nearly .5 mile) jog to T1. I realized that it was kind of raining, briefly wondering how long that had been going on, and also worrying about what it would mean for the road conditions, especially in the long descent to Keene….Down towards the lake I passed former my former co-worker Kelly who cheered me on which was awesome. As I got up closer to transition I passed Hubz, purely visible from his bright orange “GO DUTCH” t-shirt, reported that my swim was awesome, and happily high fived him!

I headed into transition, grabbed my bike bag, and headed into the chaos that was the T1 changing tent…holy banana pants was that a crazy thing. I had swam in just my shorts and sports bra, so I quickly put on my top, helmet, and gloves, while the fantastic volunteer prepared my socks and shoes. We were told at registration and athlete briefing that bibs would not be required on the bike (a surprise to me until then) so I didn’t have to worry about that. I briefly chatted with her and we decided I would forego my arm warmers, which I had thrown in the bag because we’d had a couple of crazy mornings. Turned out to be the right move. Once I was socked and shoed up I ran out, yelled my bib number, and another volunteer ran over to me with my bike. By the time I grabbed my bike and headed out of transition it had pretty much stopped raining so I breathed a huge sigh of relief although was still pretty nervous to see the road conditions. So, T1 clocked in at 9:00 minutes on the dot…a little long but not outrageous. Not too much time to worry about it though before running right up to the mount line!